It’s been a few days since Kathryn and I returned home from Spain and I’ve had some time time to reflect on my round-the-world adventure. Before I get into that, however, here’s a wrap up of our last night in Madrid.

After we arrived at our hotel (Preciados), Kathryn went out to wander the streets and do some shopping while I relaxed and posted on my blog. Since we had to carry whatever we purchased along the way, we had kept our new acquisitions to a bare minimum. Now that we were converting to air travel, we could add a few items to our backpacks.

When she returned, we decided to take a tour of the city on an open air double decker bus. We walked over to the bus stop around 8 pm. It was a perfect summer evening – the night was warm and Madrid’s streets and parks were filled with people walking, relaxing on the grass and benches, and talking with friends.

The tour eventually wound its way to the western part of the downtown area where a large crowd had gathered to watch the sunset. Kathryn and I jumped off the bus to enjoy the show. The setting was a group of government buildings perched on the edge of a 100-foot bluff which allowed a broad view toward the west. The sunset spectacular lasted about an hour which allowed us to grab a some wine and tapas from a streetside cafe.

We got back on another tour bus as it was completing its run for the night but soon jumped off again to check out the Plaza Mayor. First thing I learned in Spain: when in doubt, go to the Plaza Mayor. Every village, town and city has one. Before we got to the plaza, however, we saw a cool-looking glass building and found a high-end food court inside. The place was packed with people tasting food and drink from all over Spain and the world – wine, cheese, olives, sushi, chocolates, coffee, tapas, English beers. We tasted some Sangria (first of the trip) and got the secret recipe for our future use.

We finally cruised through the Plaza Mayor but didn’t feel the magic of any restaurants so headed back toward our hotel. Just before we got there, we noticed a Cuban restaurant down a small side street, It was a small family-run place and it provided a perfect setting for our last dinner in Spain.

The next morning was all business as we packed our bags, had breakfast and took the light rail to the airport. We checked into our flight easily and took off around 1 pm. We had some great seats in the economy plus section and settled in for the 10-hour flight to Dallas.

On the plane, we struck up a conversation with Brady, who was on his way home after a few months sailing with his family. They had bought a boat a few years ago in Thailand and were slowly sailing it around the world. Brady was 18 years old and finishing his high school education online. As he shared his stories of adventure, I realized that my “around the world” journey paled in comparison. I was really only stopping in two countries, while he was experiencing the day-by-day progression. I was reminded of my experience on the camino. It’s not the destination…

My next post will provide some thoughts on my experience. 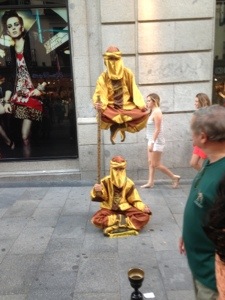 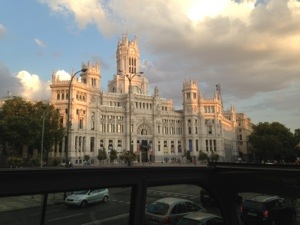 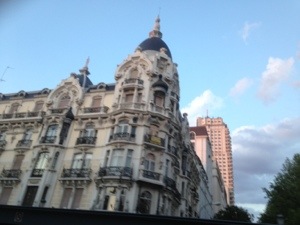 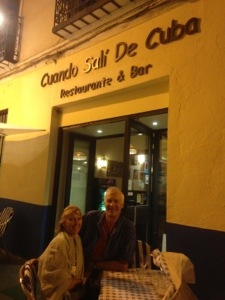