Last night we stayed in a really cool hostal in Sahagun. It was very quiet and the place had a lot of soul in the way the rooms were decorated. We had arranged to meet our friend Nancy for dinner, so we wandered down to the Plaza Major around 8 pm. We had last seen her in Burgos one week ago so we had a lot of Camino stories to catch up on.

Since we were taking the highway route versus the ancient Roman road, our day today was able to start a little later. We enjoyed a full breakfast, did a bit of grocery shopping and finally left town around 1030. The highway route features a shaded pathway for walkers and a virtually empty roadway alongside. The landscape reminded me of Montana with rolling wheat fields and mountains in the distance. It might be a little boring for walkers but it was a great cycling route.

There were only a few towns so the miles passed quickly. We stopped for a brief snack at a shaded picnic table at the turnoff to Villamarco and then a bit longer for lunch outside Reliegos. By 2 pm we were entering Mansilla de las Mulas, the final stop on this chapter of our Camino.

Since our train to Madrid left from Leon at 0930 the next day, we stopped by the Estacion de Autobuses to confirm our bus departure. our guide book had indicated that buses leave every half-hour starting at 0700, but it turned out there was only one bus that would work for us. It would be our earliest wakeup call for the entire trip.

We had previously booked a hostal for the evening so that we could coordinate the drop off of our bicycles. The price was a little higher than we been paying but the place was great and the owner Javier went out of his way to take care of our needs.

The afternoon was spent getting the bikes ready for transport, taking showers, doing laundry and relaxing. Later in the day we took a walk over to the rio Esla and strolled along the walls of the medieval city. After a beer at an albergue with a really nice garden, we went back to our hostal and enjoyed a quiet dinner on the patio with Bach playing in the background. The menu was priced like a typical menu peregrino but the food was unique to the region. We enjoyed gazpacho, tomato salad, and rabbit.

At the next table, we got to know Michaela from Germany. She had started her Camino in Logrono and planned to take about 30 days to reach Santiago. Unlike other pilgrims we had met, Michaela had pre-arranged her entire trip, including hotels, meals and daily baggage transport. She shuddered when I described sleeping on mattresses on the floor next to other pilgrims. It would be easy to dismiss her as a tourist rather than a “true pilgrim,” but it was obvious that this journey was a stretch from her usual comfort zone. I think her Camino will be just as important as all the other pilgrims I’ve met.

Tomorrow morning we start our journey back to the United States. I mentioned in a previous post that I would have some deep thoughts to share. So far, they are still wandering around in my brain. As I head home, I’ll try harder to get them out. 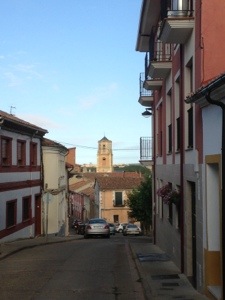 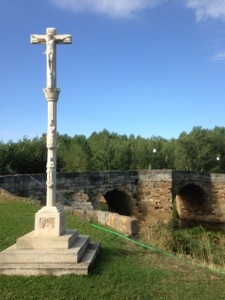 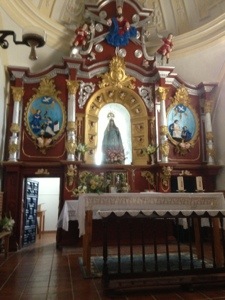 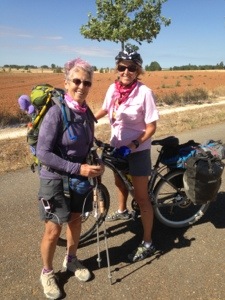 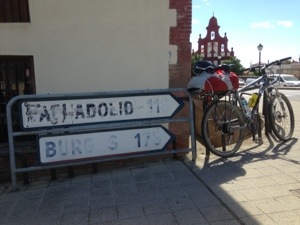 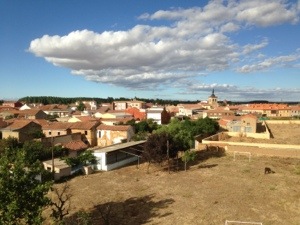 2 thoughts on “Final Day on the Camino (for now)”