Today we woke to overcast skies, similar to the typical weather at home in Southern California. When I went out earlier for Kath’s morning coffee, I noticed a desayuno especial at the local restaurant so we decided to eat a big breakfast while we were waiting for the weather to figure itself out. The food was really good – fried eggs, sausage, bacon, juice and coffee. A lot more food than the locals normally eat.

By the time we ate and packed our bags to leave, the clouds started to burn off so we headed back to the beach until our bus left for Burgos. The tide was really low and the crowds were much less than yesterday so the beach had a whole different vibe. We were able to walk out to some tide pools and around the rocks to the adjoining beaches – Playa de La Concha and Playa del Camello. It reminded me of Laguna Beach.

We continued our walk to the larger peninsula that protects the mouth of the Santander harbor. It features a well-developed City park with lots of facilities to enjoy the now beautiful weather. I’m constantly struck by the number of people walking the streets, sitting on the park benches and taking full advantage of public gathering places.

As an architect and land planner, I often try to recreate these type of places in new communities but the result often seems contrived and under-utilized. I’m convinced this is a cultural problem primarily caused by our dependence on the automobile rather than public transport. Spain is supposed to be in severe economic crisis but their public transport system is excellent. City buses take you anywhere for less than $2. Our 2-1/2 hour ride from Burgos to Santander cost about $16 on a deluxe touring bus. Right now I’m writing on a upscale Supra bus with leather seats, wifi and bottled water. This ride cost us a whopping $25 each.

I’m a little apprehensive as the bus nears Burgos. After four days of rest, our Camino continues tomorrow with a bicycle ride westward. Our bikes should be waiting for us at the hotel so we should have time to take a test ride tonight. After several days in the 90’s, the weather is supposed to be cooling to the 70’s, which should be perfect for riding.

What does the Camino have in store for us? 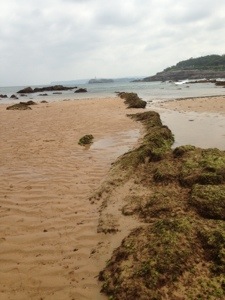 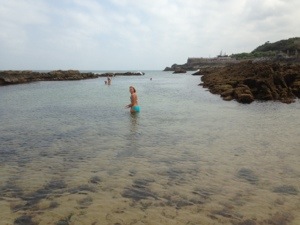 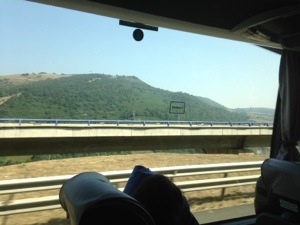