The journey of a pilgrim is not easy. There are many hazards along the way – blisters and getting lost are the small prices to pay. The road can be very dangerous as well. The descents are very tricky and loose stones are everywhere. You sometimes have to walk on the roadway and there is no shoulder to provide a margin of safety from oncoming traffic. I can’t imagine what it’s like when it rains.

I’m reflecting on this as I sit by the swimming pool in Villatuerta enjoying a cold beer.

Since I walked a few more miles than expected yesterday, I planned to walk less than planned today. I got on the road by 8 am and walked to Puente La Reina for breakfast of coffee, juice and a croissant, There’s a really cool Roman bridge as you leave town.

Other towns were spread out fairly evenly so I didn’t have to carry much water or food. The path was really busy today. There were several sections that resembled traffic jambs. The good part was that I was able to meet a lot of folks, including two brothers from Oberammergau who participated in the famous playa in 2010. I also walked with two ladies from South Africa who were carrying small packs and using the luggage transport service. Their only question about my albergue was about the bathrooms. I don’t think I’ll be seeing them in any algergues along the trail. Also walked with an Australian ballet dancer who was working the the company in Wurzburg, Germany. He had broken his foot during a performance (ouch!) and was therefore taking some time off for rehab.

I got to walk quite a while with Jill and Murray, a lovely couple from New Zealand. We walked quite a while up some very tough hills and their age did not seem to be a burden. Turns out Jill had both knees replaced in December. She was also a breast cancer survivor. We talked quite a bit and learned that he was a chemistry professor at University of Illinois when I attended in the 1970’s. I told him I had never taken a Chemistry course in my life and he said “Lucky guy.”

I finally rolled into Villatuerta around 2 pm and settles in at Casa Magica, a very cool private albergue run by Simone and Miguel. Simone used to work for Disney in NYC and France but somehow ended up running an albergue on the camino. I think a number of people have found themselves in similar situations. After checking in I was joined by Nancy from Laguna Woods, CA, about 15 minutes from where I live. The small world continues to shrink when she tells me that she used to be General Counsel for a Orange County homebuilder that I know very well.

So I’ve completed my laundry and walked back to the municipal pool for a quick swim and reflections on the hardships of the Camino. 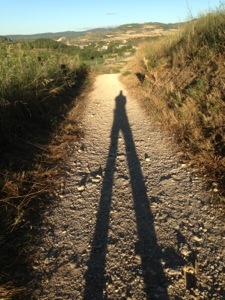 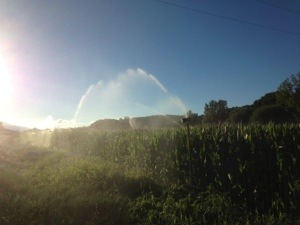 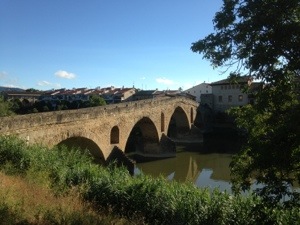 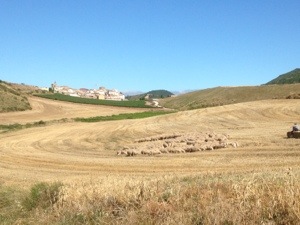 2 thoughts on “The Tough Life of a Pilgrim”